In the series of paintings Carrying Burdens the idea of carrying a psychological burden and the process of striving to free oneself of this burden is explored in scenes set in the realm of the imagination. The burden of being a transgender person constitutes the primary burden in these paintings, and they are also open to universal interpretation.

In the first painting in the series, Carrying the Future Self to Freedom, I show a figure in a desolate, rocky landscape carrying an oversize backpack with a figure inside who is the future self of the backpack carrier. Crossing over the fire in the ravine symbolizes the frightening process of coming out, resolving to become your future self. The figure inside the oversize backpack full of plants symbolizes the possibility for a future life with growth, because being in the closet can stifle and block such growth.

The second painting in the series, The Portable Burden, shows a figure leading a giant sack with legs, which symbolizes problems that still burden the person, because they are not fully aware and conscious of them. In effect, when we cannot recognize our problems we give them life and legs; they continue to burden us until we somehow come to recognize them and talk about them.

Personally, after I came out as transgender, I thought I had liberated myself and was free, but I was mistaken, for I was still weighed down by unresolved issues that seeing a therapist helped me identify and address. Color plays a symbolic role in this painting, ironically emphasizing that despite the figure’s vibrant, bright clothes and appealing external appearance, they cannot enjoy nor find happiness because of their burden has legs.

The third painting in the series, Seeing the Light that Eases the Journey, shows a figure who looks down from a precarious height at a bright light that promises to guide and show them the path to self-understanding that will put an end to carrying burdens. The large conical structures the figure carries are actually quite lightweight – empty beehives – that can be metaphorically filled with the honey of future nourishing experiences.

The fourth painting in the series, Discovering a New World, represents the liberation from burdens – the discovery of a passion in life – whatever that may constitute – love, friendship, intimacy, a cause. The figure dives into a new world animated by the fire that surrounds the new world; this fire symbolizes how inspiring the newly found desire is. (A relief print that served as the basis for this painting is also included in the show.)

Several other paintings in the Carrying Burdens series explore its theme outside the journey narrative.

Clean Up Duty shows the person who stands out, as transgender individuals often do, as a potential target, but this sense of being targeted may provide them with unexpected power and energy. Also going on clean up duty may be perceived as mistreatment, as becoming a second-class citizen, but in the case of the individual in the painting, they instead become a force to be reckoned with. The mop becomes wielded like a weapon for self-defense, and it serves as a means to resolutely confront and help put out the fires of conflict in the world.

In the painting Taking Off the Mask that Enjoys the Nectar of Imaginary Temptations a figure kneels to remove a goat head mask that still licks the honey from a honeycomb that emerges from a jumble of energetic forms and patterns. To me this represents the need to set aside any sweet pleasure that may tempt one to overindulge in. The giant anaconda symbolizes the dangers inherent in overindulging in pleasures an imaginary world can offer.

I have added several older paintings from around 2009-10 to my recently made paintings for the Carrying Burdens series, because I consider them as prequels to this series: they explore the experiences during the period before deciding to come out.

In Heading for Trouble I show a figure on a raft floating towards a menacing tree, which has caught a moon and a bird in its branches, and the figure on the raft is unable to guide the raft and control their path and fate. To me this figure represents myself as an adolescent first experiencing the onset of sexuality and feeling out of control, afraid and unable to control my fate.

The Fall symbolizes what young adulthood at times felt like while concealing my transgender identity when sensual energy that can offer great pleasure caused intense pain and suffering.

The two photographs in the show, Cargo Bike with Trailer at Moving Day’s End, show my bike loaded with a chair and bookcase and some other items that I brought over on my cargo bike and trailer to my new home in September 2017. As an avid cyclist, I want to show that with pedal power a lot can be carried on and with your bike. Taking on the burden of carrying stuff on my bike, I advocate for relying on your bike a means to carry your burdens.

Two other artworks I selected to add to the show because they comment on the theme of Carrying Burdens.

The painting Casting the Offender Off the Cliff (in my Imagination) shows one figure throwing another figure and presumably to their death from a great height. Around 2009 I experienced an incident when someone verbally assailed me and tried to provoke me to fight and argue, but I resisted and kept my cool. However a primordial anger soon surfaced in the days following this incident that I expressed in quick sketches of two figures in struggle, and one of these I turned into a painting. Casting off a burden, giving in to a desire to violence is something that found expression for me in the painting, but not in actuality.

In the relief print Reaching for Honey I show a version of the temptation scene of Adam, Eve and the Serpent in a new and more positive light, treating symbols treated as evil (the goat, the snake, the cat) as good and amusing. Thus, the burdensome weight of succumbing to sin, shame of the body, shame of sexuality, is cast off. Still, the figures are an elevated platform, so need to exercise caution, for they may literally fall, and giant snake could possibly prove dangerous, so some caution needs to be exercised in enjoying pleasure.

Finally, as part of the Carrying Burdens show, I have included a large, olive-green, oversize, cotton backpack that is set on two plinths that will be on display during the show. During the opening and closing I will wear this backpack, which resembles the backpack in the painting Carrying the Future Self to Freedom as well as clothes similar to the figure in this painting and in The Portable Burden, thus reinforcing my personal connection to the figures in the paintings and prompting discussion with visitors to the show. 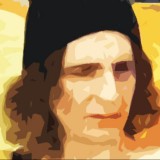